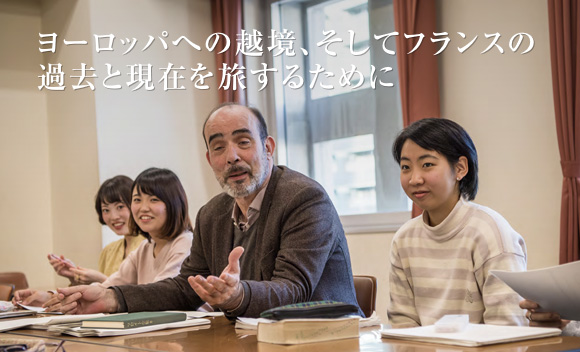 French is used as the official language in approximately 30 countries. Neither Japanese nor American, the regions of the Francophone sphere have cultures, arts, histories, and visions of the human sensibilities that support them that students learn about in conjunction with the language. We hope that your encounter with the rich yet pointed language of the literature and philosophy, and the fresh images in the art and film, will open up the doors of your own creativity.

Learn French in a leisurely fashion from the foundations

During the first and second years, study the French language regularly with four to five classes every week. There is also a great variety of conversation classes taught by French nationals. The French language presented by the teachers in class is a mixture of many different conversational topics, including literature, art, performing arts, and current events. What you are learning is the living French language.

A variety of perspectives on French culture: Literature, art, and present-day society

The cluster of specialized research courses made up of the two clusters named Textuality and Modernity is further subdivided into four streams from which you can choose a specialized field suited to your own inclinations. The Textuality subject takes up the Linguistic Culture group and the Literature group. The Linguistic Culture group takes the culture of language itself as well as of the French language as its subject, while the Literature group takes novels and poetry as its subject, making a deep examination of the human being and society, the self and romantic love, by reading the text. Modernity refers to the quality of being in the present. The Modernity subject takes up the Philosophy group and the Arts group. In the Philosophy group, things like society and the media, history and philosophy, are examined deeply, and in the Arts group, you acquire the knowledge necessary for discussing film, music, fine arts, and so on, while learning about the cultural phenomena of the Francophone sphere. Depending upon your interests, it is also possible to select freely and in a cross-cutting manner from the course clusters of all four streams.

First year: Acquire a foundation in the French language

A substantial load of five French language classes per week is intended to provide an introduction that is a foundation for the language. Broad study of the cultures of the Francophone sphere reaches from France to the rest of Europe, to Africa, and even to the Caribbean.

A course schedule with four language classes per week further advances your grasp of French. There are also classes involving presentations on topics of interest that you have explored. Pre-seminar style classes are also held to prepare for specialized research that starts in the third year.

In the third year, all the students participate in a seminar group. Students pursue deeper research on topics they discover, discuss them together in the seminar, and also sharpen the skills in self-expression and persuasion they will need when they go out into the world.

Consulting with the faculty member in charge of the seminar, students advance further with research directed toward the writing of their graduation thesis. The topics for graduation theses are truly varied. The graduation theses submitted so far are all unique, with such topics as “The Literature of Courtly Love,” “Modern French Women Viewed in Terms of Hair Style,” and “Albert Camus and His Dual Nature.”


Key Points About the Department of French Literature

We have a program for study of French language at the Catholic University of Paris for about a month during summer vacation. This study program starts with foreign study preparation courses taken in the autumn semester of the first year and the spring semester of the second year, after which you go overseas to study during summer vacation in the second year.
In the case of a six-month period of foreign study at the Catholic University of Paris during the autumn semester of the second or third year, a system for transferring credits is in place. Therefore graduation in four years is possible. Extended foreign study for a period of one year is also possible. This university has partnership agreements with the Political Studies Institute of Aix-en-Provence and with Rennes 2 University.
The experience of studying in France will no doubt prove to be very useful in the course of your life.