A panel exhibit titled Passing on Our Founder’s Spirit was held on December 2nd and 3rd at the 2018 Shirokane Festival.

In April 2013, the Japan Red Cross Society and Meiji Gakuin University presented the “Joint Declaration on the Volunteer Partnership Beyond 150,” a collaborative initiative to nurture volunteers in commemoration of the 150th anniversary of both institution’s founding. Today, the initiative is developing in new directions that encompass not only volunteer activities but also joint lectures and other collaborative educational programs.

The exhibit displayed information on the joint declaration, the history and activities of the International Red Cross and Red Crescent and the Japan Red Cross Society, and the activities of the Meiji Gakuin University Volunteer Center, as well as panels made by members of the university’s Red Cross association about their work. Another panel presented messages from graduates of the university who are now active in the Japan Red Cross Society.

“I was able to get a more in-depth understanding of what the Red Cross does. The panels described the history and nature of their activities and they were really easy to understand,” said one person who viewed the exhibit.

“I hadn’t known about the Red Cross, so it was very interesting,” said another. “Right now, I’m studying pharmaceutics. I’d like to get involved and help out, even just a little.”

“I was very impressed. I didn’t know Meiji Gakuin and the Japan Red Cross had this type of connection,” noted a third.

Overall, the exhibit provided an opportunity for more people to learn about the aid organization’s activities and its collaboration with the university. Why not consider taking the first step and volunteering in your own community? 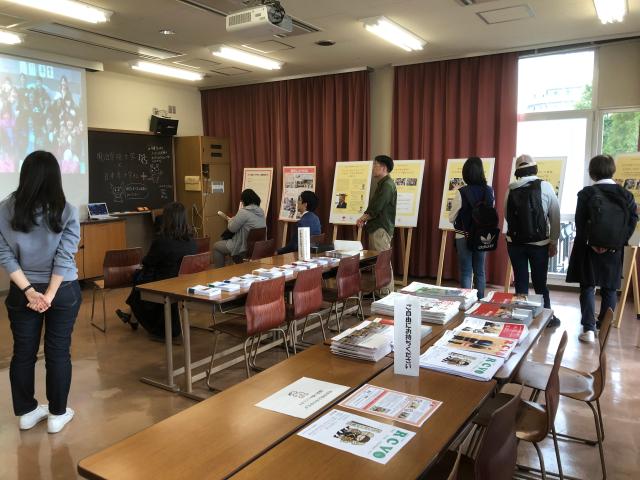