Do you know the game “backgammon”? It’s a board game where two players take turns rolling dice and moving their pieces according to the numbers that come up. Whoever first moves all fifteen of their pieces to the goal is the winner. It isn’t a very popular game in Japan, but some 300 million people enjoy it worldwide.

The state of a backgammon game is always changing, based not only on how you move, but also on what you roll. With every roll, the players must select the best move from among a multitude of possibilities. The luck of the dice plays a part, but it’s a mind sport where strategy takes the more important role. A game can last up to ten hours, so it requires concentration and perseverance. We spoke to Ms. Yazawa about it. 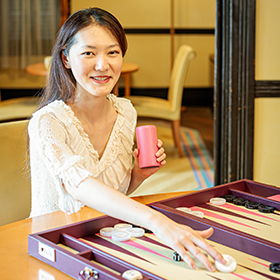 Akiko Yazawa Graduated 2003, Faculty of Law, Department of Juridical Studies
Professional backgammon playerYazawa has won numerous victories and prizes in both domestic and international tournaments. In 2014 and 2018 (Monte Carlo, Monaco), she won the main event at the World Backgammon Championship, making her the first Japanese person and female of any nationality to become World Champion twice.

When I was in junior high school, I set a goal of doing ten new things every year, and I continue that to this day. I wasn’t originally one to take on challenges, more of the “narrow, deep” type when it came to my interests, so I set this goal as a way to make up for my own deficiencies. Had I not done so, I think I never would have discovered backgammon.

My “new thing” in college was scuba diving, which I had a real passion for. While visiting Egypt on a scuba expedition, I noticed people gathering in the streets even in the afternoon, absorbed in watching some kind of game.

Wondering what it could possibly be, after returning to Japan I did some research on the Internet and realized they’d been playing backgammon. I started studying on my own, watching matches on the Internet and such, and once I’d gotten a grasp on the rules and strategies, I found myself obsessed. Even during classes, I’d be wondering why players I’d seen made a certain move, and whether it really was the best move they could have made.

I went so far as to purchase game analysis software, which dramatically increased the efficiency at which I learned, making me a much better player in a short period of time. This gave me the ability to obtain answers that made sense to me, preventing the need for mulling things over for so long and helping me focus on my schoolwork. It was an expensive investment for a student, but a good one, I think.

I continued to enjoy backgammon after graduation, using my vacation days to participate in tournaments. I had to give it up in 2008, however, when I became so ill and worn out I had to quit work.

In 2012 I discovered I had endometrial cancer. It was already quite advanced. I was told I had less than a year to live without surgery, and even with surgery there was a high probability of recurrence. This brush with death left me depressed, constantly asking myself what accomplishments I would leave behind in the world, whether having nothing to leave behind made me a worthless person, and whether keeping my uterus would allow me to have a child.

However, my husband—also a backgammon player—helped me realize that now was my only chance for surgery, that it was the best play I could make, so I decided to go ahead with the operation. I also changed my way of thinking, deciding that if I had no value, I would just have to create some. I set becoming the Backgammon World Champion as my goal.

In 2013 I was undergoing chemotherapy, which made it difficult to even walk by myself, but with the help of other competitors I was able to go to Monaco, where I managed to fight through body-wide pain to participate in the World Championship and win in the Super Jackpot division. The following year, I became the winner of the Champion at the 2014 World Championships. I believe that standing on a thin line between life and death raised my concentration and determination to new heights.

It has been five years since my surgery, and I’ve reached the point where there’s little chance of a relapse. In competition, my goal is a third world championship in main events. I’m also actively engaged in activities for promoting backgammon. I myself hate it when others try to push something on me, so rather than one-sidedly promoting backgammon, I try to present backgammon as something that communities can enjoy as part of trying “something new.”

My message to students

I’m sure that many of you have doubts about what you’ll do in your future. Whatever you do, there will be times when you just have to endure things, but you can do best at something you love. You’ll find it easier to succeed than when doing something you don’t enjoy. Opportunities don’t come just by waiting; you have to create them yourself. There are plenty of ways to do that. Just think about what you should do now to expand your own potential, and be sure you spend your time in this once-only lifetime doing something exciting.