Team-building is the practice of “Do for Others” 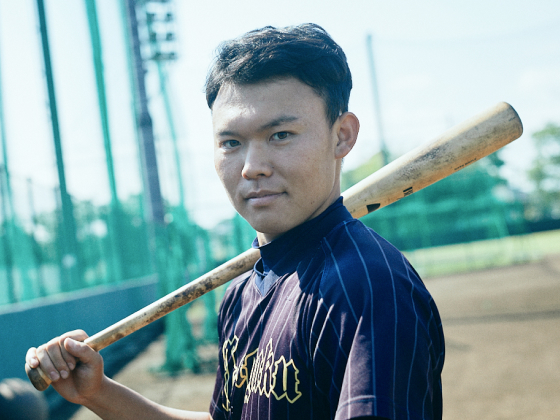 Yutaro Gido Fourth-year student Department of Juridical Studies, Faculty of LawAttracted by his impressions of the easy-going Meiji Gakuin campus, after high school Yutaro Gido joined the Department of Juridical Studies in our Faculty of Law, hoping it would provide him with opportunities to broaden his horizons and sense of values. He devoted himself to baseball during junior and senior high school, and he also joined the Meiji Gakuin baseball team after arriving here. As captain, in 2022 he took our team to a Second Division championship, and with the support of his teammates took us to the First Division for the first time in 29 seasons. He says that after graduation, he hopes to support people’s daily lives through work as a salesperson for everyday-use goods that are indispensable to people’s daily lives.

Yutaro Gido says he chose his course of studies “to broaden my sense of values and perspective by learning about the law, which can serve as a basis for making decisions.” He says that through various classes, not just his law courses, he has come to consider social issues on his own and feel closer to the law. He chose Meiji Gakuin in particular because he liked our easy-going campus. “The school’s educational philosophy is ‘Do for Others,’” he says, “and when I spend time in the free atmosphere of this campus, I can feel how all the other students really believe that. I found that really attractive.”

Gido was captain of his high school baseball team. He also joined the University’s baseball team, and he was chosen as captain in his junior year. The Meiji Gakuin baseball team emphasizes that “independence is everything,” and Mr. Gido believes that his being “highly focused on thinking about how to make the most of the teammates around me” while working on team-building is the very essence of our “Do for Others” educational philosophy. “I think ‘Do for Others’ doesn’t refer only to how we can help others, but also how we can make use of the people around us. Using this concept of doing my best to help others while also making the most of those around me, which I learned at Meiji Gakuin, will continue to be very important after I have graduated.”

The Meiji Gakuin baseball team advanced to the First Division league for the first time in 29 seasons. “I am very happy that as captain I was able to bring my teammates together, and I am also very happy that doing so produced such good results.”

After graduation, Mr. Gido plans to start working at a daily goods manufacturer, and he looks forward to the new challenges he will face there. “No matter how old I get, and no matter where I end up,” he says with passion, “I hope to be successful at making use of the people around me while bringing them together as a team. After becoming a member of society, I intend to repay those who have supported me so far.”