Congratulations to our new students in the 2022 school year 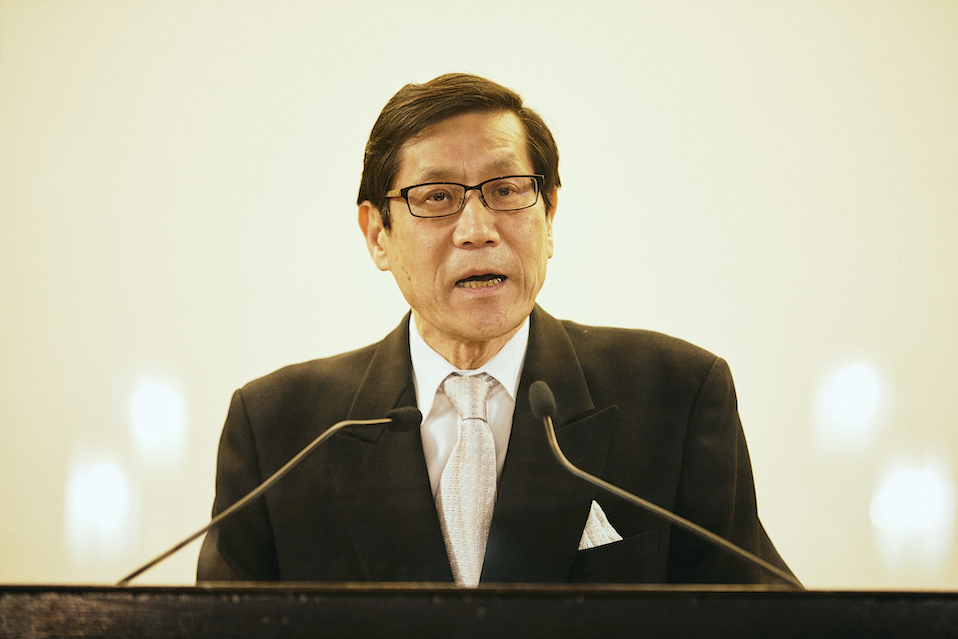 I extend my heartfelt congratulations to each of this year’s incoming students, and to their parents and guardians. On behalf of Meiji Gakuin University, I welcome you all from the bottom of my heart.

At Meiji Gakuin University, we hold important events such as entrance and graduation ceremonies here in this chapel. This spring, we were able to fill the chapel to half capacity with incoming students attending the ceremony. This is progress, considering that last year we were only able to provide remote viewing of our entrance ceremony as it was taking place in the chapel, and the year before that the ceremony was entirely online.. We look forward to the day when we can hold events in our chapel without any restrictions, and hope that day will come soon.

We all, our incoming students included, have all lived through two difficult years, and we have learned some very important things through that experience. In particular, we learned that things we take for granted like interacting with others, going to school to study, and engaging in activities with our friends and faculty members can one day suddenly become impossible. The spread of the COVID-19 pandemic brought direct human interactions to a crashing halt around the world. We have also seen the people of Ukraine have their country suddenly invaded and turned into a war zone, destroying all trace of their former daily lives. It is only by having lost the ability to go to school and study in classrooms, where we can directly interact with others, that we realize how irreplaceable that experience is.

Living amidst disaster, both natural and manmade, I believe a spirit of “doing what we can while we can” is very important. Today, you enter this new world called “the university.” Now that you have arrived, I’m sure you have many plans and dreams for what you want to do while you are here. Hold those dream dear, please, and do what you can to realize them. However, particularly in our current social climate, I think it is important to maintain an attitude of doing what you can when the opportunity presents itself.

As we enter into the third year of COVID-19 and our pandemic lifestyle drags on, it seems that fear of illness and effects of the inconveniences we are experiencing are gradually spreading in people’s minds. Despite this being a time when people need to come together in mutual aid to fight the pandemic, we instead have Russia invading Ukraine, causing Ukrainians and others around the world to add unease about war and fear for their lives to their concerns about the pandemic. In that sense, you are starting your university studies in dark times. However, as in the sayings “night is always followed by dawn” and “there is no rain that does not cease,” I believe that the four years of your university life will coincide with a period over which the times gradually brighten and we regain our former social lives. We may thus witness the moment at which an entire society feels a sense of liberation from a long period of oppression. In that sense, we are living in a very precious, special time.

But the threat of COVID-19 has not subsided, and the reality facing us is that we must proceed with extreme caution against the virus. In spring semester 2022 we will offer a combination of face-to-face and remote-learning classes. We at Meiji Gakuin University believe that face-to-face learning is the basis of a university education, so will increase availability of face-to-face classes to the extent possible. Then again, a university is not simply a place for holding classes; it is also a place for you to make friends, to meet with our faculty and staff, to encounter new knowledge and learning, to participate in club activities, and much more. Our campus awaits you, filled with a variety of experiences and encounters. Our university is furthermore blessed with a natural environment that is rare in an urban setting. I believe you can only realize how wonderful and important that is by actually coming here and spending your college life in such an environment.

So I hope that our incoming students will visit our campus as much as possible. I hope you will start your new student life here at Meiji Gakuin University in the spirit of doing what you can when the opportunity presents itself.

I truly hope that your next four years will be fruitful ones, and for today, I once again extend my congratulations on your becoming a student at Meiji Gakuin University. 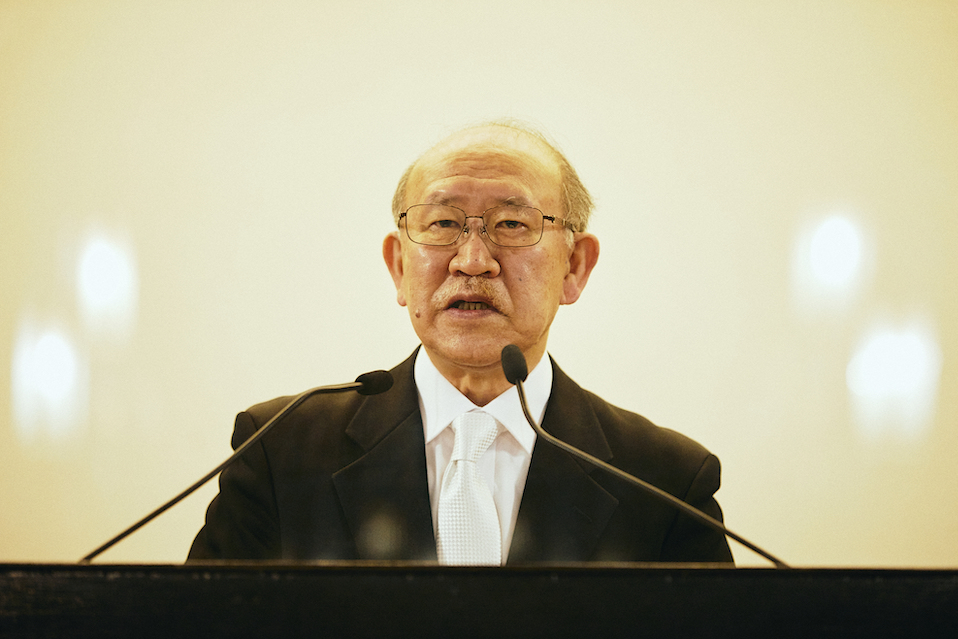 You have chosen Meiji Gakuin University from among many other universities. This school originated in 1863 as Dr. James Hepburn’s Hepburn School, so this year marks the 159th anniversary of its founding. Both before and after the school was named Meiji Gakuin, it received tremendous support from overseas missions and the labors of missionaries and teachers. Later, Japanese faculty members wrestled with many and varied issues as they endeavored to develop our school.

The educational philosophy of Meiji Gakuin University is “Do for Others,” a phrase taken from the Bibl e. However, what we mean by this is not selfless devotion or working for the sake of the world. It can be likened to another Biblical phrase: “Thou shalt love thy neighbor as thyself .” I hope that you will all start on this path by taking care of yourselves.

Meiji Gakuin has sent many talented people into the world. One of the first graduates after the school was renamed as Meiji Gakuin was Toson Shimazaki. Even today you can read his autobiographical novel Sakura no mi no juku suru toki [When the cherries ripen], which describes his bittersweet youth and was written during his time here. Meiji Gakuin University’s Memorial Hall was used as a library during Shimazaki’s time, and he often read books there. Shimazaki also wrote our school song, which you just heard, and although it mentions neither the name of our school nor Christianity, its wonderful lyrics are encouraging to young people.

I also wonder if you have heard of Toyohiko Kagawa. He studied at Meiji Gakuin and then at a seminary in Kobe. Living in slums, he devoted his life to the poor and the powerless. His autobiographical novel Before the Dawn became a huge bestseller. After the Second World War his accomplishments were widely recognized even overseas, earning him four nominations for the Nobel Peace Prize and two for the Nobel Prize in Literature.

Many Christian universities in Japan are members of a group called the Association of Christian Universities and Colleges in Asia (ACUCA), which has 62 member institutions in eight Asian countries and regions. About ten years ago, Tokyo’s International Christian University hosted the ACUCA conference in Japan with Meiji Gakuin acting as a cooperating school, and as part of that we held a service in our Shirokane campus chapel. During that service I spoke about Meiji Gakuin and also a bit about Toyohiko Kagawa. When the service was done, one attendee came up to me and asked in surprise if Kagawa had studied at Meiji Gakuin. That was when I first realized that Kagawa’s name was still known outside of Japan. I believe that people, both the famous and the unknown, who study at Meiji Gakuin and go on to participate in society live their lives directly or indirectly touched by the Christian spirit of our school.

While it is only a short service, the University holds Chapel Hour every day during the afternoon break. Amid the hustle and bustle of life, it is worthwhile to spend even just fifteen or twenty minutes in a quiet chapel as a period of self-reflection. A graduate of the University once told me that although he is not a Christian, he fondly recalls the chapel as a memory of his student days. The members of the Japanese folk-rock band The Alfee, former Meiji Gakuin students who received honorary degrees at a ceremony in the chapel about nine years ago, apparently have similar fond memories, considering that the chapel is mentioned in one their songs.

I know that four years—or two or five years for our graduate students—sounds like a long time, but it will be over before you know it. I hope this time will become a treasure for the rest of your life.

Again, my congratulations on your start of schooling here.